Young Matilda of Flanders was royalty. And a spoiled brat. Plus she was descended from Charlemagne. Her grandfather had been king of France and now, her uncle was. With thick blond hair braided down her back and blue eyes, she was a beauty. There was no question, Matilda would make a good marriage…if she would agree to what her parents arranged. Little chance of that!

To the French court came ambassadors and legates from all over. One of them caught young Matilda’s eye. Even though she would have to defy everyone and everything, Matilda knew what she wanted. And she wanted this Saxon! Brictric was his name. Tall. Blond. Handsome. It didn’t matter – the Saxons were considered somewhat less than human. Matilda could not have sullied her royal name more. Brictric strode around like a prince, for this is what he was – the son of the Saxon King, Algar. Which counted for nothing at the French Court. Smitten, it didn’t matter to Matilda. She couldn’t keep her desire to herself. She confided in her ladies that she would have him. No matter the scandal, she was willing to lower herself, to bear the shame. She arranged to have a missive delivered to Brictric – she would sacrifice all and proudly take him for her husband.

Did Brictric fall to his knees in astonished joy? Not quite. He held his head high and said, “Not me, thanks.” It was a very public humiliation for Matilda, one she would never forget. Someone soon did ask her father for her hand. It was red-headed William, the bastard son of the Duke of Normandy. “Never,” Matilda replied, “would I lower myself to marry a bastard.” William, none too pleased with this response, rode his horse to where Matilda was, caught her on her way to church, grabbed her by the braid, threw her down in front of her astounded ladies, and rode off. Her father was furious. “It’s okay,” Matilda said, “I’m going to marry him.” And she did. 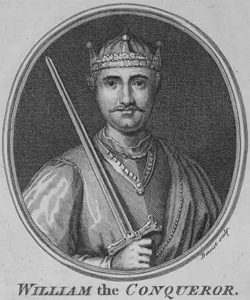 William became William the Conqueror, king of England in 1066. Matilda went to England, thinking she would be crowned queen. Not so fast, the English told her. In England, they said we have kings but no queens. You are the king’s consort, and we will call you Maud. But this was Matilda! She said call me whatever you want, but it’s king and queen, or no king at all. Matilda was crowned Queen Maud in Westminster Abbey by the Archbishop of York on May 11, 1068, the first queen of England.

Later, when she served a period as regent for her son – William had to go settle a dispute in Normandy – Matilda looked up Brictric. By this time a Saxon King in his own right, he owned many castles and huge tracts of land. Confiscating all his property and giving it to her sons and her supporters, Matilda put Brictric in prison. He eventually died there. Matilda and William had nine children. He had no bastard children – he probably didn’t dare.