The shocking breach of chivalry was blamed on Queen Joan. It was the summer of 1343, and 16 of the finest knights in Brittany had come to Paris to take part in a royal joust. They had been invited by none other than the king of France himself, Philip VI, to celebrate a truce with England. Many Bretons had sided with England in the recent war, but not Olivier de Clisson. He had once been captured by the English and ransomed.

There was no joust for these knights. All 16 were immediately arrested. De Clisson, under torture, confessed to whatever they wanted to hear. He was hung, then his body was quartered like a commoner. His head was sent back to Brittany to be displayed on a pike.

Everyone was horrified, none more so than de Clisson’s wife, Jeanne. She took her two young sons to see their father’s severed head. Then she vowed revenge. She sold all  de Clisson’s castles and belongings. With the profits, she had armor made for herself, and she and de Clisson’s men attacked French castles. For this, she became known as The Lioness of Brittany. After that, Jeanne built as many ships as she could afford to outfit – three.  She ordered the sails dyed red and the hulls painted black, so that no one could mistake them for anything but hers. 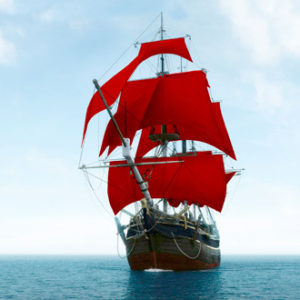 For the next 13 years, Jeanne Clisson and her men sailed the seas, attacking every French ship they came across, but no others. If there were any nobles on board, Jeanne de Clisson reportedly did them in by her own hand. She left two or three sailors alive, to insure that each attack would be reported back to the king of France. She became known as the Lioness of Brittany. Why did Jeanne quit? She fell in love with an Englishman.

NOTE: Her son Olivier became known as “the butcher,” one of the most efficient, emotionless knights of the Hundred Years War – first in the service of the English, and then on the side of the French kings, where he served as Constable of France.