Jack Ely, lead singer, was not in a good mood – sick with a cold and tired from a late night gig. The studio mike was hung from a high ceiling. The band thought they were doing a run through, but the studio said it was good enough. One take. That’s all The Kingsmen, a Seattle rock group, got to record their version of a little known song called “Louie Louie.” The next day, a rival Seattle group, Paul Revere and the Raiders, recorded the same song at the same studio.

The song was written, lyrics and music, by Richard Berry in 1954. Berry and his group, The Pharaohs, recorded “Louie Louie” – a three-verse song sung in calypso style – in 1957 at Flip Records as side B. It was a song about a sailor in a bar talking to the bartender, saying he wanted to sail back to Jamaica to see his girl. They soon re-recorded it as side A. Even so, it never made it out of the Pacific Northwest. In 1961, Rockin’ Robin and the Waiters re-recorded it, but it still went nowhere.

Then it was The Kingmen’s turn. A Boston DJ introduced their version as “the worst song I’ve ever heard.” It went what today we call viral. Some people thought the unintelligible words we

re about sex and wrote letters of complaint to U.S. Attorney General Robert Kennedy. Soon, Edgar Hoover’s FBI got involved; they spent more than two years trying to figure out the lyrics. After their exhaustive investigation, the results? They were “unable to determine any of the wording.” All this attention made The Kingsmen’s recording the most purchased, played and copied song of Rock ‘n Roll history, both in the U.S. and internationally.

So what exactly are the terrible words?

Verse one:
Fine little girl waits for me.
Me catch the ship across the sea.
Me sail the ship all alone.
Me never think me make it home.

Verse two:
Three nights and days me sail the sea.
Me think of girl constantly.
On the ship I dream she’s there.
I smell the rose in her hair.

Verse three:
Me see Jamaica moon above.
It won’t be long me see my love.
Me take her in my arms and then
Me tell her I never leave again.*

After being demoted from lead singer to drummer, Jack Ely left The Kingsmen before the song was released. During live shows, his name was not mentioned and his part was lip-synced. Richard Berry made no money from the mega-hit until 1986. 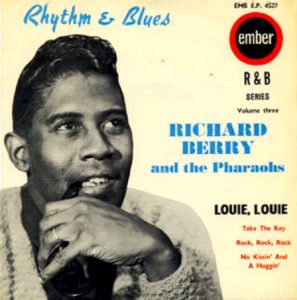