As Pope, the teenager would be a disaster. He was the pampered son of Alberic, princeps (head) of Rome. Octavian would inherit his father’s title. But Alberic had wanted more for his favorite son. He wanted Octavian to be the next Pope. The nobles swore an oath to Alberic in St. Peter’s Basilica that they would make this happen. In 954, Alberic died; 17-year-old, Octavian became princeps of Rome. As leader of Rome? He was not that great.

In 956, Pope Agapetus II died. The nobles kept their word – on Dec. 16, Octavian, still a teenager, was elected Pope, taking the name John XII.  As leader of the Church?  John did not seem to get the idea that a Pope should have certain restrictions. After more than six years, the Cardinals had had enough. In 963, they accused Pope John of visiting whorehouses, having concubines, blinding priests, setting fires, and a host of other sins. They excommunicated John. They replaced him with a layman, whose birth name seems to have been lost to history. All in one day, this layman had to be made a priest, a cardinal-bishop and Bishop of Rome, before becoming Pope Leo VIII. 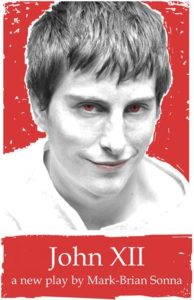 John fought back. He excommunicated Pope Leo, who was sufficiently frightened to flee for his life. Back in St. Peter’s seat, John continued his decadent life style. A year later, this brought him to May 14th. He was in the arms of a lover, in the act, purportedly with a married woman, when the 27-year-old Pope suddenly died. Maybe he died of a heart attack. Or maybe the woman’s husband killed him. When John XII went to meet his Maker, he had a lot to answer for. The Church called Leo out of hiding and he resumed his position as head of the Papacy.