In 1871, Berthe Ringer, 22, was so impressed with her fiancé Karl’s business that she invested her own money and became a partner. A year later, when she married Karl, she lost her status – a wife could not legally own or invest in a business in Germany. Still, Berthe worked side-by-side with Karl for years.

In 1888, Bertha thought her husband was too timid. She wanted to prove that autos could be used to get to places far away. Without telling Karl – and without legal permission – Bertha took two of their five children, Richard, 14, and Eugen, 16 and got in one of their cars to go for a drive. A long one. This was a rather tricky thing, because the car ran on a fuel that could only be bought in drugstores. 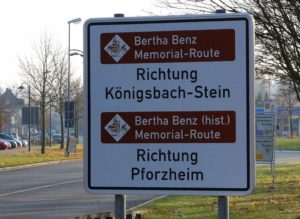 Berthe and her sons left their home in Mannheim at dawn. Besides getting fuel, stops included a break to the keep the brakes from overheating (on the spot, Berthe invented brake linings!) and to use her hatpin to unclog a fuel line. After dark, 66 miles later, Berthe and her sons arrived at her mother’s home in Pforzheim. The next morning, they made the return drive back to Mannheim. In addition to brake linings, Berthe suggested to Karl that they needed to add another gear to their cars, for climbing hills.

The amazing trip got tons of attention. Berthe, the first long distance automobile driver, single-handedly changed the auto industry.  Her married name?  Benz.  In 1906, Karl changed the company name from Benz to Benz and Sons.