That was the year Jacob Rodney Cohen, 28, gave up his dream and became an aluminum siding salesman. He had been writing jokes for other comics for years. Calling himself Jack Roy, he struggled for nine years to make it as a stand-up comic, even including a stint as a singing waiter (he got fired!) before giving it up.  He had a young family to support.

But Cohen couldn’t give up his dream.  Renaming himself Rodney Dangerfield (the name Jack Benny had used for an inept cowboy on his radio show), Cohen re-invented himself and tried again, to little success.

“I played one club,” he joked, “and it was so far out, my act was reviewed in Field & Stream.”

Finally, when he was 46, it happened – The Ed Sullivan Show had a last minute cancellation.  Rodney Dangerfield was ready.  This time, finally, America was ready for his “I don’t get no respect” routine.  TV, movies, Caddyshack, Back to School, Easy Money, his own comedy club in New York City and in 1981, a Grammy for the best comedy album, No Respect. 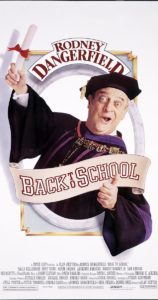 In 2003, when he was being admitted to a hospital for brain surgery, he was asked how long he would be there.  “If all goes well,” Dangerfield said, “about a week.  If not, about an hour and a half.”  It went well.  But in August of the next year, another surgery went badly.  After being in a coma, Rodney Dangerfield died in October.  His wife had an airplane write Respect in the sky at the cemetery but Dangerfield had the last word – his un-pc gravestone says “Rodney Dangerfield…there goes the neighborhood.” 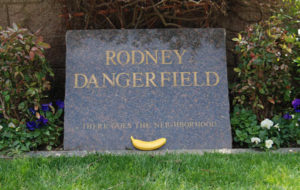