If you are going to call for help, be careful whom you call! In 440 A.D. or so, as a means of keeping peace with the Vandals, Roman Emperor Theodosius II betrothed his five-year-old daughter, Eudocia, to Huneric, the son of Gaiseric, king of the Vandals. When Eudocia was 16 (and still not married), her father was assassinated by his trusted friend, Petronius Maximus. To doubly consolidate his new power as emperor, Petronius forced Eudocia’s mother to marry him, and then had his son marry Eudocia.

Eudocia’s mother knew just what to do – get a message to Gaiseric: come fast! But don’t sack the city!  Gaiseric came rushing from his stronghold in Carthage. The gates of Rome were flung opened to him and his Vandals. Petronius fled, only to be caught outside the city gates and killed by Roman citizens.  Gaiseric kept his word, he did not sack Rome. But he and his men carried off a lot of Rome’s treasures, including Eudocia, her mother and her younger sister, to be held for ransom. Seven years later, when the ransom sums were finally paid, Eudocia’s mother and her sister went back to Rome, but Eudocia, now married to Huneric, chose to stay with him in Carthage. 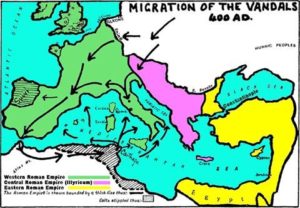