Tonight was Christmas Eve. The organ at St. Nicholas church in Oberndorff was broken. In the afternoon, Father Josef Mohr, 26, walked a couple of miles from St. Nicholas to his friend Franz Gruber’s home in the nearby town of Arnsdorf, to give him a six-stanza poem he had written two years earlier. Franz, a weaver who had become an elementary school teacher, was the organist at Father Mohr’s church. The request was daunting: could Franz write music to the words so that the song could be sung that very evening at Christmas Eve Mass at Father Mohr’s church in Oberndorff?

Franz Gruber obliged; he would do it, using what he had – his guitar. That night, the two men sang the words as Franz played his guitar for the worshippers at the Church of St. Nicholas in the tiny town of Oberndorff on the Austrian Bavarian border. The song? Stille Nacht. Silent Night.  Father Mohr was transferred to another town the following year. The church was torn down after the turn of the 20th century. The song, which has been translated and sung in 140 languages, belongs to the world and is now in the public domain. The town of Oberndorff [current population about 5,500] was declared a UNESCO World Heritage site in 2011. 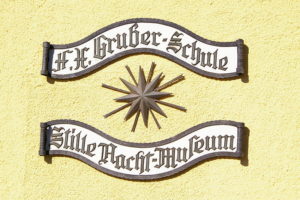 On Christmas Eve afternoon, 1914, during World War I, the war suddenly stopped – the German and English soldiers came out of their trenches and gave each other small presents of cigarettes and whatever they had. In the muddy no-man’s-land between them, they played an impromptu soccer match. And they sang Silent Night, Stille Nacht, the words in the two languages blending together. May all our languages blend together like that in peace.