It was 1 a.m., September 15th. On Lexington Avenue in Manhattan, Billy Wilder was trying to shoot a street scene for his movie, The Seven Year Itch. In an instant, a huge crowd materialized, yelling and cheering. What did they see?  Emphasizing the movie’s theme that she was so hot that she had to keep her panties in the refrigerator, Marilyn Monroe was standing over a subway vent while breathlessly gushing, “Oooh, do you feel the breeze from the subway?” Marilyn struggled to keep her white skirt from blowing up around her from revealing… a lot.

Out of the crowd stormed her angry husband of eight months, New York Yankee’s homerun king Joe DiMaggio. Was she wearing white panties? Black? (The scene was later reshot in the film studio and both versions made the final cut for the film. If you look closely, it seems she had different white shoes.)  That night, Joe and Marilyn had a very public shouting match. The next month, she filed for divorce. Joe, who never remarried, outlived Marilyn by 37 years. ABC news reported that just before he died, he said, “I’ll finally get to see Marilyn again.” 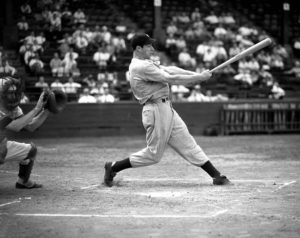 The infamous white dress was designed by Oscar winner William Travilla, but some claimed he actually bought it off a rack in a department store. Travilla kept the dress. Some feared it was lost, but it turned up in his possessions after he died. It was sold at auction in 2011. It was expected to go for about a million dollars, but the secret buyer paid $5,600,000. Why did Joe hate the white dress so much?  Because he thought his wife was not wearing panties at all that night on Lexington Avenue. He may have been right. 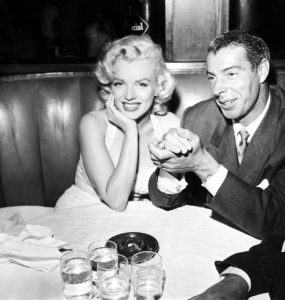