When 23-year-old Sister Rosetta Tharpe took the stage at Carnegie Hall just before Christmas, 1938, she took the audience’s breath away. First, she was playing a guitar; that was for men, not women. Second, she was playing it in a way no one had ever heard before. No one, that is, except the small group who loved the new gospel music created by Rosetta’s pastor, Bishop Charles Harrison Mason. It was gospel with kick-ass rhythm, which did offend some church-goers! 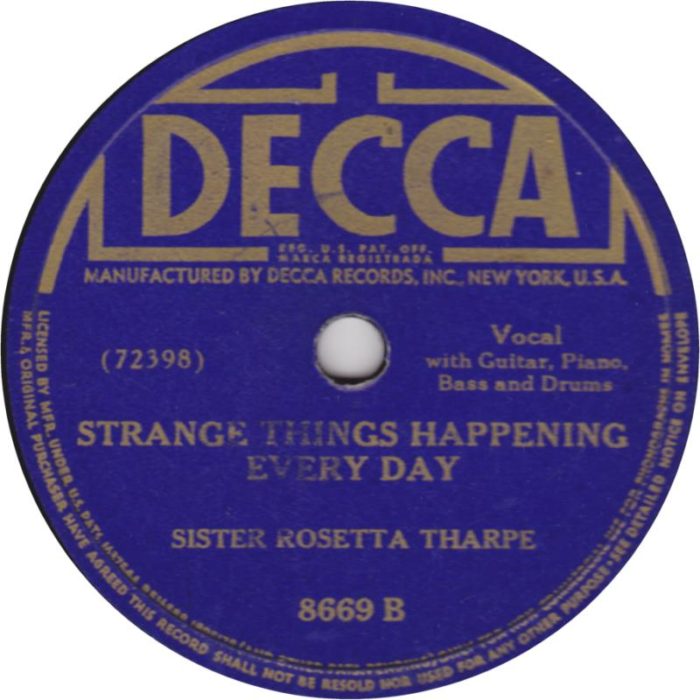 Rosetta was born in Cotton Plant, Alabama in 1915. Both her parents, cotton pickers, were musicians. Her mother, who played guitar and mandolin, was a preacher in Mason’s church, Church of God in Christ, and she toured with a gospel band. At age four, Rosetta joined the tour. At six, she was the star performer. Rosetta gave a new dimension to the Old South’s gospel songs and was soon writing her own lyrics and music. Just before she performed at Carnegie Hall, Decca Records released a two-record set of her songs, the first time Decca had ever done gospel. It was an instant success.

In 1931, the electric guitar was created and in the 40s, it was becoming popular. Rosetta Tharpe and Les Paul were early believers. So popular was Rosetta that when she married her third husband, Russell Morrison, in 1951, she invited people to the wedding and charged admission; 25,000 people came. Her influence pervades music, from Muddy Waters to Johnny Cash to Elvis to Little Richard to Chuck Berry. Called the Godmother of Rock and Roll, Rosetta is known as the most famous Rock ‘n Roll founder no one knows. That is changing. Her life is featured in a new play, Shout Sister Shout by playwright Cheryl West.