Okay, one of the Ivans was truly terrible. But he had a pretty authentic reason to be. When Ivan, the Grand Duke of Moscow, was three and his little brother Yuri, a deaf mute, was two, their father, Czar Vasily III, died. Their mother acted as regent for the babies, but when Ivan was seven, she, too, died, perhaps poisoned. The Boyars seized power. The two little boys’ lives descended into hell. For the next five years, the brothers were beaten, starved, imprisoned. Dressed in rags, they were only cleaned up when they had to be presented at ceremonies. Ivan, with no outlet for his fear, or for the guilt of not being able to protect his little brother, began torturing whatever birds and small animals he could get his hands on.

After six years, the Boyars lost power. At 13, Ivan found himself the Czar of Russia. To punish the leaders of the Boyars, Ivan had them thrown alive into an enclosure filled with starving dogs. Although the word “terrible” had the meaning of “awesome,” Ivan’s childhood experiences had left him truly terrible, vacillating for the rest of his life between almost unimaginable, random cruelty and extreme religious penitence.

At 17, Czar Ivan some 500 (or maybe 1,500) beautiful young women paraded before him. On first sight, Ivan fell in love with Anastasia Romanova. Their marriage had a great calming influence on Ivan’s demons, but it was not without tragedy. When he was 23, Ivan was ill with such a high fever that it was thought he would surely die. He recovered and decided to make a pilgrimage to a church to give thanks to God. As Ivan and Anastasia and their third child, newborn son Dmitri, were crossing a bridge, the nurse in charge of the baby somehow let him slip from her arms into the water and he drowned. 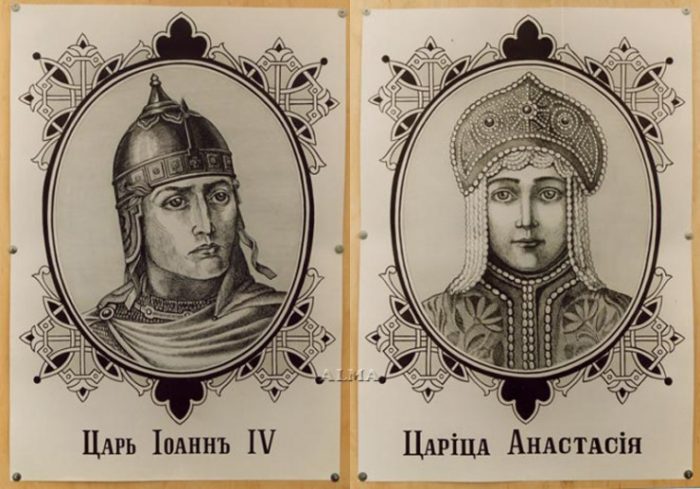 Seven years later, a worse tragedy struck. Anastasia died from an illness eighteen days before her 30th birthday. Ivan was deranged by grief. When he recovered his senses, he became convinced that the Boyars had poisoned Anastasia. His appetite for violence came back, never again to abate. In this, his oldest son, also named Ivan, often took part.

In 1581, when the czar was 51, infuriated that his pregnant daughter-in-law was wearing the wrong dress, he beat her. She lost the baby. His son accused him of causing the miscarriage. In a rage at these words, the czar lashed out at his son with a metal-tipped staff, gashing his son’s head. Ivan dropped to the floor, bleeding profusely, nearly losing consciousness. His father fell to his knees, begging forgiveness. Ivan was devastated when his son died of the resulting infection.

Ivan’s own life was to end three years after he killed his son. He was just sitting down to play a game of chess when he keeled over. The cause was mercury poisoning. Ivan the Terrible, suffering from syphilis, had been ingesting the common cure of the time – liquid mercury – for years. Ivan’s second son, Feodor, perhaps mentally handicapped, became the next czar of Russia. When Feodor died, the centuries’ old Rurik Dynasty came to an end.