Lyndon Johnson was a born wheeler-dealer.  While still in his 20s, Lyndon won election to the U.S. House of Representatives from Texas in 1938 and again in 1940.  But it quickly became apparent to him that the senate was where the power was.  Lyndon was in luck – in April of 1941, Morris Sheppard, after almost three decades as senator from Texas, died in office.  Lyndon, 32, was a dark horse, but by the day of the special election in June, he looked like the sure winner.  Suddenly, votes coming in from East Texas gave savvy politician Wilbert “Pappy” O’Daniel the lead.  O’Daniel won by 1,311 votes.  It was a lesson not lost on young Lyndon.  It would be the last time Lyndon Johnson would be out-wheel-dealed. 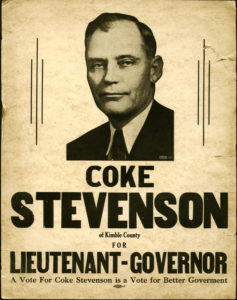 Pappy O’Daniel chose not to run for re-election in 1948.  In the Democratic primary (which meant the sure winner in the general election), Lyndon faced a tough opponent, the popular ex-governor of Texas, Coke Stevenson.  What went on during that election is still being argued about.  Early on election night, Coke led by 20,000 votes.  By night’s end, his lead had shrunk to 854.  Tuesday, it was 349.  By Friday, it was a mere 157, but Coke was still ahead.  Then Friday night, the reversal came – Lyndon won by 87 votes.  After protests, the count eventually stood.  Johnson took the nickname “Landslide Lyndon” proudly to his new senate seat – until he discovered it was not an accolade in Washington but a joke.