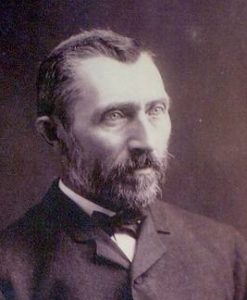 When he died in 1890, his mother threw away a lot of his weird paintings. And no wonder – he had never sold a single painting in his entire life. Well, that’s not exactly true. His younger brother did buy one. He had been was a problem child. The son of a Dutch minister, he saw himself following his father’s footstep, but he had no social skills and often seemed to be lost in a fog. A quiet, serious child, he was traumatized when he was sent to boarding school when he was nine

As he grew older, he fell in love on sight and was usually rejected just as quickly. One year, he fell wildly in love with his cousin. The next year, he voluntarily checked himself into an asylum, but there were no long-term positive results. His brother talked him into painting, and paid his way to Paris to paint. He did not work the way other painters did. Sometimes, he finished a painting in a single day. In one period, he painted 70 paintings in 70 days. But most of the time, he did not paint at all, going for long stretches without picking up a brush. His entire painting career lasted ten years. After completing about 200 paintings and selling none, discouraged, he left Paris and went to Arles.

Saying, “The diseases that we civilized people labor under most are melancholy and pessimism,” he increasingly sought help, to no avail. He was painting one day in the summer of 1890 when he went into a field, shot himself in the chest, then walked to get help. He died two days later. His brother devastated. They are buried next to each other in Auvers-sur-Oise, France.

Today, no one can think of Vincent Van Gogh without thinking of the astronomical prices his paintings command. In 2010, he had four of the top ten most expensive paintings sold: #4—portrait of Dr. Gachet; #8—portrait of Joseph Roulin; # 9—irises; and #10—a self-portrait. The list changes year after year, as the prices paid goes up and up. Many of his paintings, at the time of sale, command this highest market price ever. Wonder how many paintings his mother destroyed.