Mother liked him best. She really did. But his father, King Darius II, did not. Cyrus, a golden boy, was the second son. His older brother, Artaxerxes, was heir to the Kingdom of Persia. When the king was ill and dying, after a 24-year reign of political intrigues and open revolts, Cyrus’s mother rushed him to his father’s bedside, in hopes that Darius would name Cyrus the next king. Darius refused.

Artaxerxes inherited the troubled kingdom. Cyrus was immediately accused of trying to murder his brother. This was certainly true. But in stepped their mother, pleading with her older son for Cyrus’s life. She did indeed save him, but only on condition that he be exiled.

Cyrus agreed, and left. Was it any surprise that he got an army of mercenaries? It took him about three years to hire 10,000 Greeks. Cyrus lied to them – he promised them they were not going to attack his brother, the king, because it was suicide to go against the Persian army.

When the king got word of his brother’s treachery, he sent his army out to meet them and the Greeks learned the horrible truth. They were ready to quit, but Cyrus gave such an impassioned speech that the Greeks agreed to fight. This was the Battle of Cunaxa, 401 BC. Cyrus and his Greeks won! 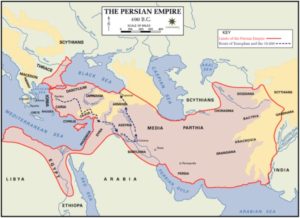 Cyrus took a victory march through the defeated Persian army. They all fell on the ground before him except one, a young soldier named Mithridates. He ran at Cyrus, stabbing him in the eye with a dart. As Cyrus stumbled, he was attacked by another of the king’s soldiers, who killed him. With Cyrus lying dead on the battlefield, his mercenaries quickly disbanded.

Artaxerxes went on to rule badly for 43 years, leaving 115 sons and a Persian Empire gravely weakened. His heir, Artaxerxes III, had all the royal family murdered when he came to power. He ruled for two decades, until he was assassinated in 338 BC. Perhaps Cyrus’s mother was right to have preferred Cyrus.