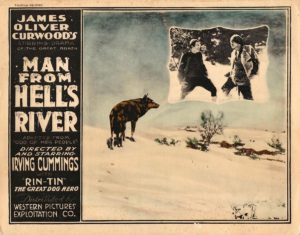 Lee Duncan and his dog were watching a movie crew shoot a scene with a wolf for a movie called Man from Hell’s River. The wolf could not get it. Duncan called to the crew, “Hey guys, my dog could do that on the first take.” “Oh, sure!” they said. “Get lost!” But after more wolf failures, they agree to give the dog a shot.

The dog, a large Alsatian, was not just any dog. Duncan had rescued him as a shell-shocked puppy from the trenches in France in World War I, where Duncan was a U.S. Army corporal. Man and dog survived the war and were now back in Duncan’s home state – California. Duncan and his dog were actually an act; Duncan was supporting them by give demonstrations of how high his dog could leap.

Duncan had named the puppy Rin Tin Tin after a French puppet. To the crew’s amazement, Rin Tin Tin did the job perfectly in one take. His movie career was born. Rin Tin Tin debuted in his own right the next year, 1923, in Where the North Begins. He was an instant star, one of the biggest box-office draws ever. Rin Tin Tin did all his own stunts, but did have understudies, in case something went wrong. It never did. 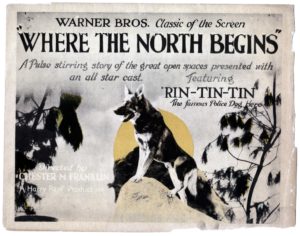 When the going rate for the human stars at Warner Brothers was $150/week, Rin Tin Tin was making a cool $1000/week. Rin Tin Tin has a star on the Hollywood Walk of Fame, and may have actually received the most votes for an Academy Award in 1929, but it was decided a human had to win best actor and the Oscar went to Emil Jennings.

But Rin Tin Tin’s biggest success was saving Warner Brother’s movie business. In spite of all the brothers’ innovations and investments, their film company was always on the verge of bankruptcy; it was put on a solid financial footing by the profits from Rin Tin Tin’s huge box office success.

In all, Lee Duncan made about $5 million on his dog’s films, a huge fortune at that time. Rin Tin Tin made 26 movies and was set to make number 27 when suddenly, at age 14, he died. Duncan sent him back to France to be buried in his own country. There were sons and daughters; the line continues to this day.