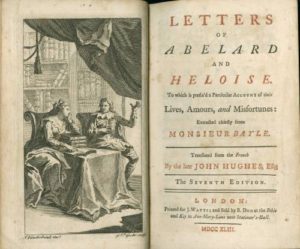 Canon Fulbert of Notre Dame wanted an excellent education for his brilliant teenage niece, Heloise. Who better than the most preeminent and respected scholar in the land, the monk Peter Abelard? At 39, Abelard was a famed philosopher and teacher, handsome and regal. 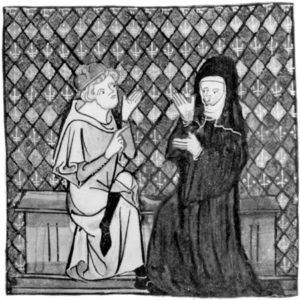 Not only was Heloise brilliant, she was also strikingly beautiful. Shockingly, Abelard fell wildly in love. At first, Heloise did not return his affection, but she soon succumbed to his charms. Because Abelard wanted to obtain a position in the Church, the pair tried to keep their affair secret. It wasn’t long before an infuriated Fulbert found out what was going on under his roof. He threw Abelard out, demanding that they never see each other again.

Abelard couldn’t leave Heloise alone. They met in secret. The next news shocked Fulbert to the core – Heloise was pregnant. There was a secret wedding, and the pair fled Paris and ended up in Brittany. Their son was christened Astrolabe, but it is not known what happened to him.

Abelard convinced Heloise to join a nunnery. To Fulbert, this looked like Abelard had destroyed her life and was now abandoning her. Fulbert could take no more. He and some friends entered Abelard’s room late one night, grabbed him, held him down and castrated him.

Abelard survived. He went to live at the abbey at Cluny, under the protection of Peter the Venerable. He died there two years later. His friends sent his body to Heloise at her monastery, where he was buried in the Oratory of Paraclete. When she died 22 years later – at the same age that Peter had died – she had chosen to be buried next to him. In 1817, their bones were moved to Pere Lachaise Cemetery in Paris. Even today, their grave is a huge tourist attraction.