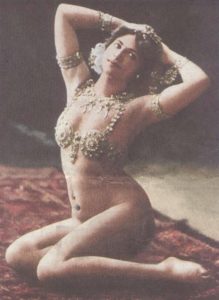 Facing the firing squad, Mata Hari refused the white blindfold. In a firing squad, all the shooters fire bullets except one, who fires blanks, so that no shooter knows who fires the fatal bullet. As the sun came up, Mata Hari smiled, seemingly unafraid, even blowing a kiss toward her executioners.

Born in Holland, her name was Margaretha Geertruida Zelle. Her mother died when Margaretha was 13. Still a teenager, Margaretha answered a newspaper ad and married navy officer Rudolf MacLeod. He was 21 years her senior, a bigamist, and a wife batterer. 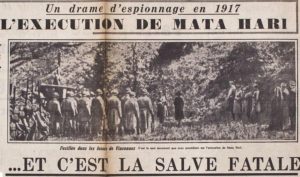 They had two children, a son and a daughter. When MacLeod was stationed in East Java, he took his young family with him. There, Margaretha joined a dance company and learned some local moves and words. In a horrible tragedy, her two-year-old son died of poisoning. MacLeod blamed the housekeeper. The marriage did not survive; MacLeod kept the daughter. 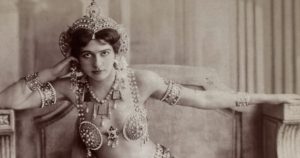 Alone and on her own in Paris, needing to support herself, she said she was Mata Hari, “eye of the day,” and got work as an artist’s model and a horseback-riding circus performer. Then, when she began dancing her Javanese dances, sometimes clothed, sometimes not, Mata Hari became an overnight sensation. She translated her new popularity into money by taking high ranking military lovers – French, German, Russian, it didn’t matter to her. The French recruited her as a spy in World War I, but soon decided she was Double Agent H-21. Arrested in Paris in February 1917, she was tried and found guilty. The punishment for treason? Death.

Awakened in her prison cell at about 4 a.m., Oct. 15, 1917, Mata Hari dressed slowly in a long black coat and a black hat. She was driven to a field on the outskirts of Paris. There, the firing squad waited. As the sun came up, Mata Hari smiled. Some say the kiss and her “merci, monsieur” were for her attorney and lover, Edouard Clunet. There is speculation that she may have been thanking him because she believed all 12 guns would be firing blanks. It wasn’t so.