The U.S. Supreme Court agreed to hear the case. It was being argued by no less than former Supreme Court justice Arthur Goldberg. What was at stake was Major League Baseball’s 1897 reserve clause: after a player played all the years of his original contract, a team owner could reserve that player for each new season. Owners could trade players or sell them outright. A player had no say in his own career.

The baseball player Goldberg was fighting for was Curt Flood. From 1963 to 1969, as a St. Louis Cardinal, Flood had earned seven straight National League Gold Glove awards. He went an entire season, 1966, without making a single error, and once had an error-free streak of 223 games. Flood was also an excellent hitter, leading the National League in singles in ’64, ’66 and ’68. He helped lead the Cardinals to two World Series championships. Flood loved baseball and he loved the Cardinals, but in 1969, he was traded to the Philadelphia Phillies. 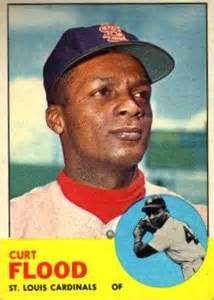 Instead of going to Philadelphia to play ball, Flood went to court against Bowie Kuhn, the commissioner of baseball. Flood said American soldiers were dying in Vietnam so the Vietnamese could be free, and American students were free to protest the war, but where was the freedom for a baseball player?

Flood, 31, at the top of his game, filed his lawsuit, Flood v. Kuhn. In the summer of 1972, the U.S. Supreme Court ruled 5-3 for the owners. Curt Flood did not go to Philadelphia. He went to Spain and opened a bar. He never played professional baseball again.

Curt Flood died in 1997 of throat cancer, two days after his 59th birthday. During his battle against the reserve clause, Curt said, “I am pleased God made my skin black, I just wish He had made it thicker.” In the end, even the Supreme Court could not stop free agency. 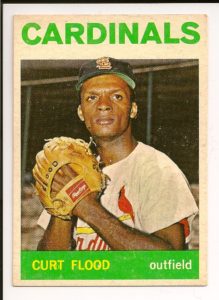