“Those crazy enough to try to change the world often do.”

This was not Gandhi. Not Martin Luther King. Not Churchill. Not even Shakespeare! It was Branch Rickey. Who was he? For you non-baseball fans, he was the president and general manager of the Brooklyn Dodgers. And what he did in fact did change the world.

Black baseball players were not allowed on the field with white players, so they started their own teams, with Hispanics and women, including stars like Toni Stone. They formed the Negro National League in 1920. That year, Kenesaw Mountain Landis became Major League Baseball’s first commissioner.

The leagues stayed separate and segregated. Then World War II came along. Many players volunteered to fight, but they returned home to the same segregated country. Some of the top people in white baseball were appalled by this, among them Bill Veeck, owner of the Cleveland Indians.

Veeck’s efforts were met by Landis, who fought integration until his last breath. Branch Rickey saw that he had to do things secretly. Pretending he was saving a Negro League team, he interviewed black players, looking for the ideal candidate to become a Brooklyn Dodger.

In 1944, Landis died. Happy Chandler succeeded him. He believed that talented men should play on whatever teams wanted them. Still, Branch Rickey was careful not to show his hand. Rickey chose Jackie Robinson, who had served in the Navy, and secretly signed him on Aug. 28, 1945.

Rickey said, “Someday, I am going to have to stand before God, and if He asked me why I didn’t let that Robinson fellow play, I don’t think saying ‘because of the color of his skin’ would be a good enough answer.”

In October, the secret was leaked. When Jackie Robinson stepped onto the grass at Ebbets Field as a Brooklyn Dodger, the reaction was bad, not only from other managers and players but from Rickey’s own team. 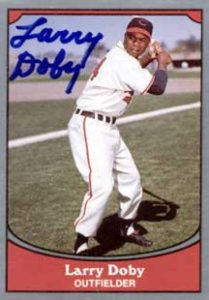 As Dodgers’ shortstop Pee Wee Reese said, “You can hate a man for a lot of reasons, but the color of his skin ain’t one of ‘em.”