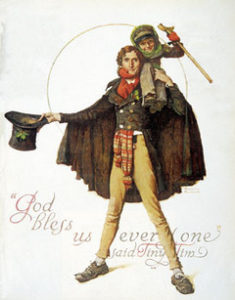 It took only two months for Charles Dickens to create Tiny Tim and Scrooge and write A Christmas Carol, but what was his purpose? It was not about Christmas.

When Charles was 12, his father, a government employee, was sentenced to debtors’ prison. As was the custom, the family went with him, all except Charles, the second oldest, and his older sister. Eleven-year-old Charles was forced to leave school and get a job. He was assigned to a warehouse, putting labels on containers of “boot blacking.” It was hard work and the warehouse conditions were terrible.

Fortune smiled on Charles’s father when his grandmother died. The father inherited enough money to pay his debts. The family was released from prison, but Charles’s mother decided, much to his shock, that he should continue his warehouse job. Charles did return to school and eventually became a clerk for some lawyers, discovered his writings abilities, and combined his childhood experiences and his talents to write such novels as Oliver Twist.

These stories were printed in installments in newspapers and magazines, with the writer being paid by the word – thus they had lots of adjectives and adverbs as the story moved along! Dickens wrote 90 pages a month when he was writing Oliver Twist. The stories were later printed as books.

In A Christmas Carol, based on his own awful experience, Dickens was advocating for better treatment for children. The story actually began as a pamphlet Dickens was going to call “An Appeal to the People of England on behalf of the Poor Man’s Child.” He wanted to draw attention to conditions that allowed children as young as eight to work 11-hour days, six days a week, thanks to the Industrial Revolution. But being the natural storyteller he was, Dickens couldn’t resist making larger than life characters. And throwing in a ghost.

Dickens was already a popular author and A Christmas Carol was an instant success in December of 1843.