“I want to go back.” These words were not supposed to be possible. The romantics believe that Alex knew exactly what he was saying. The scientists believe that Alex was not using real language but a “two-way communication system,” whatever that exactly means!

Alex was a parrot, an African Grey. They are known for their ability to learn and for their long life expectancy. Irene Pepperberg, a scientist, wanted to work with an African Grey. In order for her experiment not to be tainted, Pepperberg went to a pet store and asked a clerk to pick out an African Grey. She named him ALEX, for Avian Language Experiment, but later changed it to Avian Learning Experiment. Still, he was Alex.

Under Pepperberg’s tutelage, Alex learned to do remarkable things. If he answered correctly, Alex would get a treat, but he had to specify which treat he wanted. He had up to a 150-word vocabulary and could identify 50 objects by name, plus seven colors and five shapes. He created a word. He knew the word for banana and the word for cherry, but not for apple. He called a red apple a “banberry.” Alex had the verbal skills of a 2-year-old child and the problem-solving ability of a 5-year-old child. And he even encouraged the other African Greys in the lab to try harder. 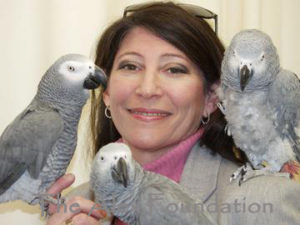 Once when Pepperberg had to leave Alex at the vet, which he hated, he called to her, “Come here, I love you, I’m sorry.” The day he said, “I want to go back” to where the other birds were, Alex had been in a long training session and was clearly tired. Birds are not supposed to be capable of doing what he did – have feelings and put words together to express those feelings. 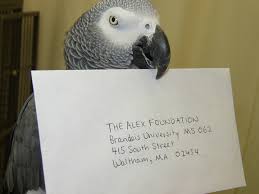 Although African Greys live routinely to be 50, and 70 is not unheard of, Alex died of thickening of the artery walls in 2007, when he was just 30. The last words Irene Pepperberg heard Alex say were, “You be good. See you tomorrow. I love you.”