This was the year the unthinkable happened – a woman ran for Congress. And won! The state was Montana and the woman was Republican Jeannette Rankin. 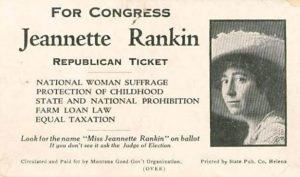 Her achievement was monumental because she was a lobbyist for the suffrage movement. In fact, because she had pushed Montana to give women the vote in 1914, they could vote for her in 1916. When she took her seat as the first woman in Congress, she was given a standing ovation.

One of her first jobs was to vote about World War I. On Apr. 2, 1917, she voted NO. The House vote was 373 – 50. Montana newspapers, pro-war, called her a “crying schoolgirl.” Rankin spent her time in the House pushing for the vote for women. In 1918, the House voted yes but the Senate voted no. When it came time for her to run for her seat again, Montana gerrymandered Rankin out of her district. She ran for the U.S. Senate as an independent and lost. 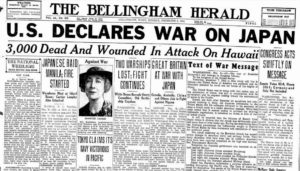 Rankin spent the next two decades working for social issues, including laws against child labor. In 1941, she decided to run for the House again. She won over three other Republicans in the primary and then won the general election by 54%. Back in the House, she faced a second war vote, this time in the days following Pearl Harbor. A life-long pacifist, she again voted NO. This time, the vote was 388 – 1. She did not seek reelection.

For thirty years, Rankin championed her issues. In 1973, when she was 90, she was considering running for Congress again, to be able to vote against the Vietnam War, but she died.

The first woman to be elected governor of a state who did not follow her governor husband into office was Ella T. Grasso, the daughter of Italian immigrants. She was elected governor of Connecticut in 1975, won re-election easily in 1978, and retired in 1980 after being diagnosed with cancer.

Today, only one state in the United States has never elected a woman governor, a woman U.S. senator, or a woman to the House of Representatives. That state is Mississippi. That is soon to change.