Margaret was four and Emma was fourteen when the U.S. Congress passed Anthony Conmstock’s 1873 Comstock Law, the “Suppression of Trade in, and Circulation of, Obscene Literature and Articles of Immoral Use.” It would put both Emma and Margaret in jail. 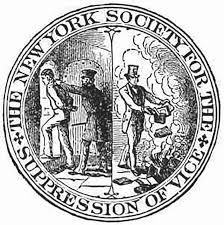 Both women ended up in New York City. Emma came from Russia and then Rochester, NY, a teenager working as a seamstress 10 hours a day for $2.50 a week (4¢ an hour). Margaret became a nurse and moved there when she got married. Both were crusaders, Emma for fair work laws, Margaret for free speech. But that’s not what either one was jailed for. It was obscenity.

In 1916, Emma Goldman, who had been whipped by her father for being a girl, was arrested in New York City for passing out Sanger’s pamphlet: Family Planning, how avoid getting pregnant. A violation of the 1873 Comstock Law. She was arrested for obscenity. She was sent to a workhouse for 14 days.

In 1916, Margaret Sanger, who had seen her beloved mother die at 49 after 18 pregnancies, had become aware that young women in the city’s slums were dying from self-attempted abortions. She was giving out birth control information to them. She was arrested for obscenity. When Sanger was convicted, the trial judge ruled that women did not have “the right to copulate with a feeling of security that there will be no resulting conception.” In January 1917, she was sent to a workhouse for 30 days.

Goldman was deported. In England, she met like-minded people and took her beliefs a step further –
women had the right not only to not get pregnant but to actually enjoy sex.

Sanger could not be deported. She was a United States citizen. In 1921, Sanger founded the American Birth Control League, which became Planned Parenthood. Sanger, unlike Goldman, lived long enough to be honored for her work. 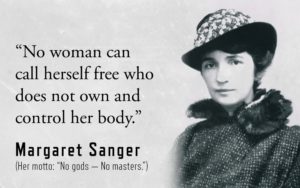