July 4th 1939 was Lou Gehrig Appreciation Day. It was a double header against the Washington Senators. Yankee Stadium was jammed with almost 62,000 fans. During the break between games, the fans heard a lot of people speak as Gehrig stood there, silent. He had said he would not speak.

Lou’s mother, a German immigrant who worked as a house cleaner, doted on him. Lou grew up to be a six feet tall, batted left and threw left. His signing bonus was $1500 and he joined the Yankees just when Babe Ruth, the Sultan of Swat, seemed to be slowing down. The rivalry inspired both players. Called The Pride of the Yankees and The Iron Horse because he never missed a game, Lou was a Yankee for 16 seasons, from 1924 to 1939, playing 2,130 games straight, a record that stood for more than half a century. (Baltimore Orioles Can Ripkin Jr. broke it on Sept. 6, 1995.)

Gehrig made the All Stars every year from 1933 to 1939. Ruth, eight years older, made the All Stars only in 1933 and 1934. But in the years they went head to head in home runs, Gehrig beat Ruth only once, in 1934, although he hit more than forty home runs in each of five separate seasons. The first jersey retired from any sport was Lou Gehrig’s #4. By unanimous vote, he was inducted into the Baseball Hall of Fame, with the mandatory waiting period ignored, in December of 1939, the year he retired.

The disease that felled Lou Gehrig was ALS in 1941 – amyotrophic lateral sclerosis. It is known as Lou Gehrig’s Disease. A progressive degeneration of the muscles, ALS strikes about one in 100,000, and is more common in men than women, often starting when people are in their thirties. There is no known cure but progress is being made. 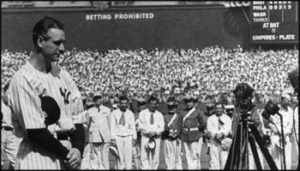 When the tribute to Gehrig was over and the speakers started to move away, the fans began chanting, “We want Gehrig!” Lou came back, stepped in front of the microphones and the hushed crowd heard Lou Gehrig speak. “Today, I consider myself the luckiest man on the face of the earth.”