I used to be Snow White but I drifted. 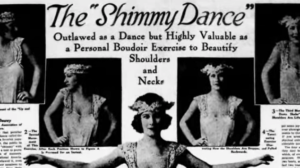 The daughter of a corset model, little Mae was on a vaudeville stage by the time she was five. At 13, billed as the Baby Vamp, she was doing the new dance, the shimmy, to packed houses in New York City.

Decades ahead of her time, Mae West wrote and starred in her own Broadway plays. Her first play, not so subtly titled Sex, was panned by the critics, but the ticket office was booming – until police showed up and arrested the entire cast. West, convicted of public obscenity, was sentenced to ten days in jail. She had to wear a prison uniform, but she won the negotiations to wear her own silk panties. She was released after eight days, with two days off for good behavior.

When movies began, it was basically ‘anything goes,’ but soon, the censors came in. That was about the time Mae West arrived in Hollywood. She was 38. (She kept her age a closely guarded secret). Paramount gave her the right to rewrite her own lines. In the 1932 movie, Night After Night, a hat-check girl said to Mae West’s character, “My goodness, what lovely diamonds!” The line West added? “Goodness had nothing to do with it.”* 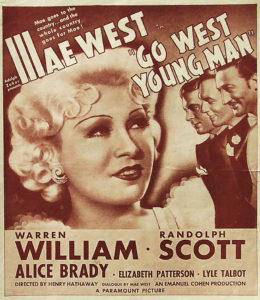 Two years after West arrived in Hollywood, the new Production Code went into effect, and the battle between West and the censors began. For her, it was game to see what she could get by them. One her most famous lines was from the 1933 movie, She Done Him Wrong. Met at a train station by a policeman, West’s character says, “Is that a gun in your pocket or are you just happy to see me?” The 66 minute-long film cost $200,000 and initially took in $2 million.

Mae West continued to perform all her life, and was shocked when someone at a party told her she had seen one of her films at a museum showing. Asked in her old age about her famous bust, she said, “It was all binding and padding and tricks.” She titled her autobiography, Goodness Had Nothing to do with It. Asked If censorship had hurt her, she said, “I believe in censorship. I made a fortune out of it.” 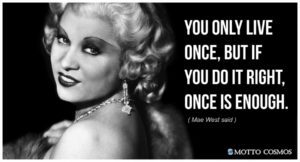