What is May Irwin famous for? The very first kiss every filmed. May Irwin was born in Canada and named Georgina May Campbell. When she was 13, her father died. Her mother, in need of money to support herself and her two daughters, Adeline and Georgia, had them do a vaudeville act as “The Irwin Sisters.” Their first professional gig was at a theater in Buffalo, New York. Soon, they moved to New York City and their act began appearing in various theaters.

When she was 21, May, a natural comedian, went out on her own, writing her own lyrics and singing in music halls. By the time she was 25, she was earning an astounding $2,000 a week. She sang such bawdy songs as “There’ll be a Hot Time in the Old Town Tonight” and “Hot Tamale Alley.” 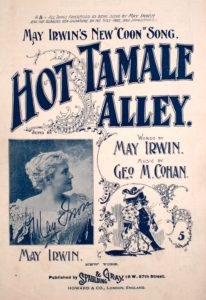 After making number of movies, May decided she like vaudeville better and returned to her first love. She made a fortune, invested wisely and had three homes and a few husbands. And what about that kiss on film? It happened because Thomas Edison saw May and her Broadway play co-star John Rice do a “lingering kiss” on stage during the 1895 Broadway production of The Widow Jones.

Edison thought this kiss would be perfect for film. He had them recreate it and released a film appropriately title The Kiss in 1896. It was so shocking that it was denounced by ministers everywhere as “obscene.” The Catholic Church called for film censorship. 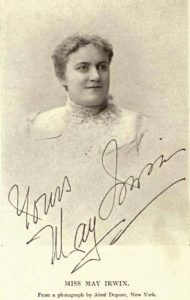 The 1986 Chap Book said: “The spectacle of the prolonged pasturing on each other’s lips was beastly enough in life size on the stage but magnified to gargantuan proportions and repeated three times over it is absolutely disgusting.” How long does the film last? 18 seconds.