This prophecy, in Quatrain #I-35, made Nostradamus famous

The young lion will defeat the old one,

In the field of battle in single combat,

He will pierce his eyes in a cage of gold,

Two wounds in one, and then a cruel death.

But what did it mean?

The French King, Henri II, loved jousting. What better way to celebrate his 14-year-old daughter’s marriage than with a five-day jousting tournament? It was the big summer event of 1559. On the first day of the joust, the court astrologer warned Henri’s wife, Catherine de’ Medici, that Henri would be killed. The 40-year-old king scoffed at his wife’s fears. Worried, Catherine called in the new man of prognostication, Nostradamus. He went even further than the court astrologer – a golden cage, a pierced eye, a cruel death.

All went well during the first two days of the tournament. On the third day, June 30, Catherine begged Henri not to compete. He ignored her, going up against his favorite, Gabriel, Comte de Montgomerie, the captain of his Scottish Guard. The King was the clear winner, yet he decided to have one more run. As the two horses thundered by each other, Montgomerie’s lance somehow shattered and a sliver pierced the golden helmet of the king, lodging in his eye.

Henri was cared for by the best physicians in the land, but the infection grew worse and worse, causing the king excruciating pain. After suffering horribly for ten days, Henri absolved Montgomerie of all blame, and died. Montgomerie converted to Protestantism, fought against the crown and was eventually beheaded for treason. Just before he died, he was told that his property confiscated and his titles permanently revoked. 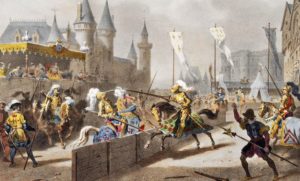 With Henri’s death, Catherine was no longer queen. She became regent to her first-born son, the sickly 15-year-old Francis II. After ruling for a year-and-a-half, Francis died from an infection of the middle ear. Two more of Catherine’s sons inherited the throne, but all three sons suffered from open, oozing sores that could never be cured. Mere months after Catherine died, her last son was assassinated.

Nostradamus’s Prophesies continues to be a best seller. There continue to be books about him, plus documentaries and TV shows. 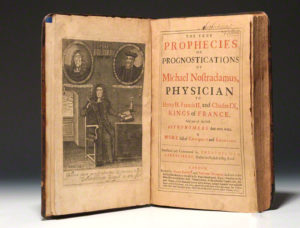