Khadijah was the daughter of an extremely successful caravan merchant. When she was 32, her father died and she inherited the business. Khadijah, now wealthy, received endless marriage proposals, but she had already buried two husbands. Not wanting to go through that a third time, she swore she would never marry again.

A few years passed. Khadijah was still looking for a man she could trust to accompany her caravans. Someone suggested Muhammad, a distant relative of hers; he was said to be scrupulously honest. Khadijah decided to give him a try. She sent him out with a caravan to Syria. When he returned with double the profits Khadijah had expected, she was impressed. By the third successful trip, Khadijah was the one proposing marriage to the 25-year-old Muhammad. He accepted.

Muhammad was a serious young man. In 610, when he was 40, he was praying in a cave. The Archangel Gabriel visited him. Frightened, Muhammad returned home to Khadijah. She told him this was meant to be. He began telling everyone they should return to the true religion of Abraham. It was a message that rich Meccans did not want to hear. After years of preaching, Muhammad had only a small following of believers. The truest was Khadijah.

In 619, Khadijah died of a fever. Three years later, Muhammad decided to move his small group of followers from Mecca to Medina. For the next 23 years, his sect grew little by little, and the Archangel Gabriel kept talking to him. Muhammad wrote down everything the angel said. The writings became the Qur’an, the Holy Book of the new religion, Islam.

When Muhammad died, like Khadijah, of a fever, he left his followers with a problem; Muhammad had no living sons and he had not named a successor. One group, calling themselves Sunnis, believed that the most capable man should take over, and Abu Bakr became the first caliph. The other group believed that the leadership should pass only to one of Muhammad’s relatives. This group, the Shia, chose Ali ibn Abi Talib, the husband of one of Muhammad’s daughter.

Today, one fifth of the world’s population is Muslim; about 90% of the 1.6 billion Muslims are Sunnis. There are many other sects, but the Shia make up the majority of the remaining 10%. The problem remains unresolved. 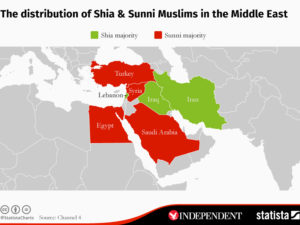