Until that year, when he was nine, Temujin had a wonderful life. He was the oldest son of the chief. Then his father was poisoned. Temujin, his mother and his little brothers were kicked out of the tribe. It was a desperate existence. To stay alive, they ate rats. No surprise, Temujin grew into an angry teen. Still a teenager, he became the leader of the very tribe that had expelled him. 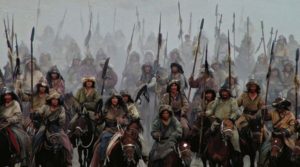 Soon, he was leading his Mongols in huge sweeps of wild rampages across Asia and even into Europe, where they and their horses could travel for days without food or water. If they were met with resistance, they leveled the town, killing every living thing in it. The terror they spread is almost incomprehensible – a thundering herd appearing from nowhere as if by magic, leaving death and destruction in its wake.

In 1206, when he was 44, Temujin gave himself a new name: Genghis Khan. Ruler of all the Rulers. Emperor of all the Emperors. And he was. His land stretched from the Pacific Ocean to the Black Sea, and fear of him stretched much farther.

Genghis Khan conquered a vast amount of land (some 12 million square miles), but he never lost his basic nature, preferring a simple tent to a palace. His most trusted advisors were his mother and his wife. Because his young bride, Börte, had once been kidnapped, he made it a law that no women could be kidnapped. 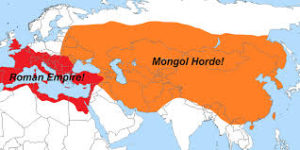 He gave teachers and doctors a tax break. He insisted on religious and ethnic tolerance and separation of religion and government, although he was the earthly representative of the god of the Mongols, Mongke Koko Tengri, the Eternal Blue Sky.

Men and women were equal under the law. He forbade people to bathe in rivers, to keep the water clean. His army could leave no debris – each soldier was responsible for picking up anything dropped by the soldier in front of him. He abolished the system of torture but the punishment for breaking his laws was death.

When he was laying siege to Xi-Xia in northwestern China, the seemingly invincible Genghis Khan fell from his horse; his injuries may have eventually been the cause of his death. Genghis Khan’s armies, fanatically devoted to him, may have killed as many as 40 million people.