After nearly choking to death as a child, Tennessee Williams had a fear of dying in that way,

Tennessee was a brilliant publicist – his own.  His name was not Tennessee. And he was not even born in Tennessee. But those lies were necessary for him to be eligible to enter a playwriting contest. So Thomas Lanier Williams gave himself that cool first name, but there was still a problem. He was already a year older than the age limit. He fixed that, too, neatly making himself younger. It paid off. He won first prize. And, as they say, the rest is history.

He came from a dysfunctional family – his father called him “Miss Nancy” – that was often the inspiration for his plays. His work dealt with the taboo issues of the time: mental illness, alcoholism, homosexuality. 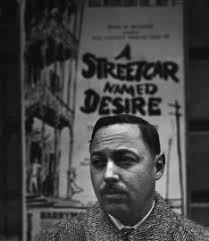 Tennessee’s first play, The Glass Menagerie, debuted in Chicago in 1944. It was made into a movie. His second play, A Streetcar Named Desire, after a huge success on Broadway, was made into a movie. Enormous success on Broadway and Hollywood followed, year after year. Williams liked to go to his own opening night and talk loudly throughout the performance.

He was famous for having only one copy of what he was working on and then sending it through the regular mail to his agent. Once, behind deadline, he was sitting on the back lawn at a friend’s house, scribbling away, when a sudden breeze blew a slew of papers into a pond. The panicked friend tried to fish them out of the water, but Williams was unconcerned.

In 1963, Tennessee’s longtime lover, Frank Merlo, died from cancer. He sank into a deep depression that lasted a decade. A month before his 72nd birthday, Tennessee was in New York City’s Elycée Hotel, in a room by himself. In the morning, he was found lying on the floor next to the bed. He was dead.

The room was strewn with half empty liquor bottles and prescription drug bottles but it took an autopsy to find the cause of death – Tennessee always put eye drops in his eyes, leaning back, holding the bottle cap in his mouth. The cap had lodged in his throat, choking him. 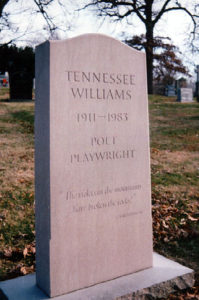