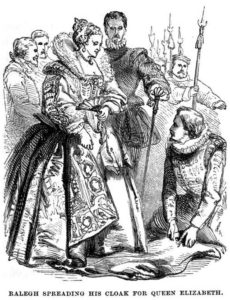 Raleigh had done the impossible – born a commoner, he had been knighted. In Elizabethan England, Raleigh did it with daring, intelligence, talent, and not the least, fabulous good looks. There are many stories of how the dashing young Raleigh first attracted the attention of the queen. Did he throw his cloak into the mud at her feet? Did he climb a wall and scratch his initials on her windowsill? He might have actually done both.

Raleigh, 19 years younger than Queen Elizabeth I, became one of her favorites. He was one of the many young, handsome men that she was in love with. His was a golden life, exploring the world in the name of his queen and being knighted, but he had a few dark secrets. He was a member of a clandestine scientific group. He may not have believed in God. He may have been bisexual. These things did not matter while Elizabeth was his champion.

But Elizabeth would not live forever. And Raleigh’s enemies were well prepared even before she died. The new king, James I, already had in his possession letters telling him – falsely – that Raleigh was against his succession to the English throne. Elizabeth died on March 24, 1603. Not four months later, King James imprisoned Raleigh in the Tower of London. He kept Raleigh there for the next 13 years.

Raleigh finally talked his way out of the Tower by telling King James he could lead an expedition to the Orinoco River in South America (he had done this before) and return with gold for the king. When Raleigh returned without any gold, back into the Tower he went. On the way to being imprisoned, he ignored many chances to escape. Ill, he may have welcomed death. 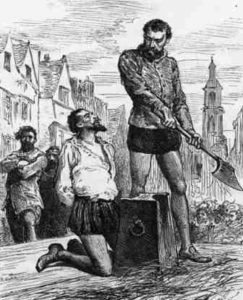 King James ordered the execution, not in the manner of a Knight of the Realm, but with an axe, the way commoners were killed. Raleigh asked to examine the axe and called it “sharp medicine.” He added that an axe was a great physician, curing all ills, and asked to have it done quickly. It was.